The Exotic Side of French Roulette - Neighbours Of Zero, Orphans And Neighbours And Thirds Of The Wheel Of Tiers

Roulette is, at heart, a simple game. So trust French casino-dwellers to develop some rather more intricate ways in which to play. If you're given the chance to play a French-style roulette table, then you should, as this will probably give you access to the punter-friendly En Prison/La Partage rules. Combine these with a single zero layout (unlike double-zero American-style tables), and the house edge falls to around 1.4%. However, if you are taking a spin on a true French table, you'll find much that's, erm, foreign. And most of this will be due to the existence of bet types like Voisins du Zero, Tiers du Cylindre, and Orphelins.

Whereas most roulette tables (in land casinos) assign coloured chips to the players, so that winning bets can be easily identified, the chips on French tables differ only in the numerical amounts they have printed on them. With nothing to distinguish one player from another, it becomes important not to have too many chips on the board at the same time. The need for space partly inspired the invention of an additional grid, called the 'Racetrack'. This oval-shaped section sits to the side of the main play area. it features all of the same numbers - 0 to 36 - but within a different layout. Its point is to act as an extension to the main grid, and to encourage some of the players to switch to exotic 'French Bets'. These French bets were traditionally referred to as 'Call Bets' or 'Announced Bets', as they were too specialist to be featured on the main tables, and players had to call out when they wanted to play them.

So what exactly are these bets, and what do they consist of?

The Ins and Outs of Call Bets
If you look at the main wheel for roulette, you'll see that it can be broken down into two large slices, along with a couple of smaller segments sitting between them in the middle. Each of these sections contains a set of numbers that make up one of the following bets:

Voisins du Zero - Meaning 'neighbours of zero', this bet refers to the 17 numbers on the wheel that reach from 22, right round to 25. Slap-bang in the middle of this grouping is the Zero. Hence, all of the numbers around it are its 'neighbours'.

Tiers du Cylindre - Translating as 'thirds of the wheel', this bet-type corresponds to an exact third of the wheel, specifically the third at the bottom of the wheel. Its numbers stretch from 33 right round to 27.

Orphelins - These 'orphans' are two small segments that take in the eight numbers not associated with either the Voisins du Zero or Tiers du Cylindre. The numbers covered by Orphelins are 9, 31, 14, 20 and 1 on one side of the table, and 17, 34 and 6 on the other. 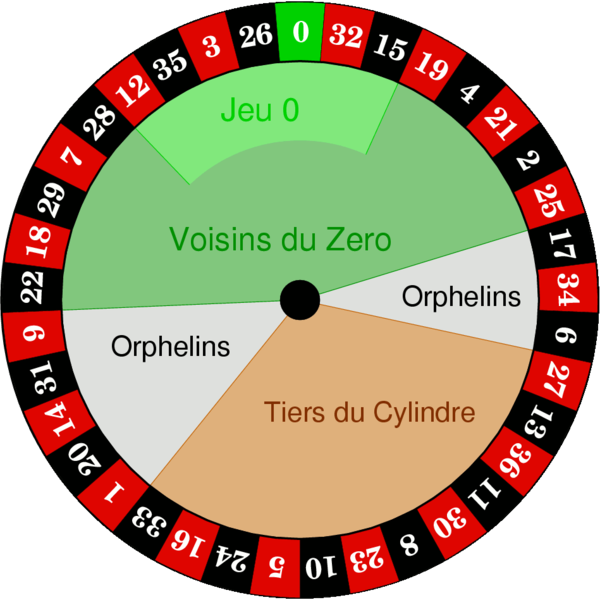 When you place one of these bets, you effectively cover all of the numbers in the sequence. Some of the numbers, though, will be covered more than once, or will have a different payout. In the next section, we'll look at exactly which numbers are placed, and how this affects the payouts in each case. Note, though, if you simply want to place the bet, you don't really need to know exactly which numbers are involved - it'll simply be a matter of clicking on the relevant option on the table. These exotic combinations may be found in a separate section, such as the 'Call Bets' menu. If you're not interested in the exact details of the bets themselves, you might want to skip the next section.

Orphelins are also fairly straightforward. Here, you place a single chip on the number 1, and four further chips on the following number combinations 6/9, 14/17, 17/20, and 31/34. You obviously have only a 2.7% (1 out of 37) chance of winning with the 1, although you would scoop a profit of 31 chips when successful - 35 chips for the win, minus the four chips lost on the other combinations. The four two-number combinations, on the other hand, would each give you a profit of only 13 chips (17 chips for the win, minus the four losing chips), but would pay out 5.4% of the time. This works out as a total win rate of 24.3%.

Most complex of all is Voisins du Zero. This takes in 17 different numbers, and involves the placement of nine different bets. Five of those bets would involve single chips being placed on five different number combinations: 4/7, 12/15, 18/21, 19/22, and 32/35. As before, these would each carry a 5.4% chance of success, and would yield a 9 chip profit after deducting the eight chips lost on other bets. However, Voisins du Zero also involves the placement of another four chips on slightly more elaborate combinations. Two chips are used to cover 0, 2, and 3. If the ball lands on one of these numbers, you win 15 chips overall - the double-payout of 22 chips, minus the seven chips lost on the remaining combinations. The success rate here is a healthy 8.11% (3 out of 37). You would also put two remaining chips on 25, 26, 28, and 29. These bets carry a win rate of 10.8% (4 out of 37). Voisins du Zero, then, has wildly differing payouts accoridng to which of the number combinations comes good. Overall, though, it amounts to a 45.9% chance of success.

Do the Bets Work? 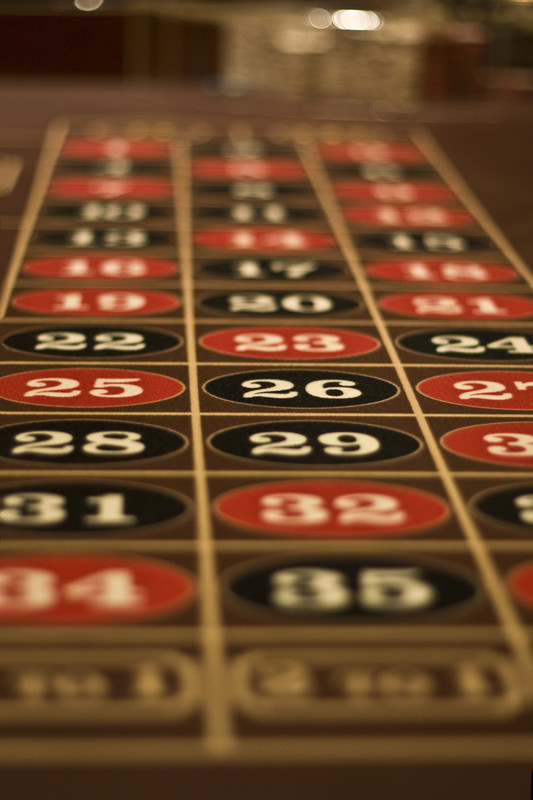 So are any of these bets worth playing? Well, the success rate certainly differs, with Voisins du Zero winning 45.9% of the time, Tiers du Cylindre 32.4% of the time, and the Orphelins just 24.3%. On the other hand, the Voisins du Zero requires more chips (nine), and the Orphelins fewer(five). In fact, the house edge for all three bets works out as exactly the same - 2.7%. The same as the standard house edge, then. So, for all their fanciness, these elaborate bet types give you no more chance of success than a standard red/black play.

That's not to say there aren't some advantages. If you suspect there may be some sort of defect (most likely an imbalance) in the equipment, causing numbers in one section of the wheel to come up again and again, there's a good chance that the affected numbers will be covered predominantly by one of the three French bets above. In that case, playing one of these bets might be a good way to take advantage of the bias, but without tipping off the dealer that a specific part of the wheel may be defective. All in all, though, we suspect that most players will only want to use these strategies if they wish to show off their in-depth knowledge of roulette bets.